When Bridger Watts wakes up naked in bed with two strange guys sucking him off, his first thought is that he has no idea how he got here. Struggling to remember the night before, all he can recall is that he got way too drunk.

Details are murky on how he ended up in bed with Asher Devin and Seamus O’Reilly, but now that they have him here, the couple has decided to make the most of the boy toy in bed with them. Seamus sucks him off, and his cock grows rock hard watching Asher kiss up and down Bridger’s sleeping body.

Their mouths meet at the tip of Bridger’s cock, and as they begin to tag team his shaft, Bridger wakes up. Surprised, he nonetheless must admit it feels really good, and after asking him if he’d rather they stop, Bridger contemplates the situation and decides to just go with it.

Immediately, Asher stands and Bridger sucks him off, as Seamus mounts his cock, riding him reverse as Asher begins to stroke Seamus’ dick. Bridger fucks Seamus as Asher looks on longingly, then they switch as Bridger bends Asher over and gives him a taste.

Bridger fucks Asher hard from behind and it gives Seamus the idea to finally indulge his fantasy of two cocks at one time, so he mounts Asher as Bridger works his way in, pumping him full of cock as Seamus strokes himself to orgasm. 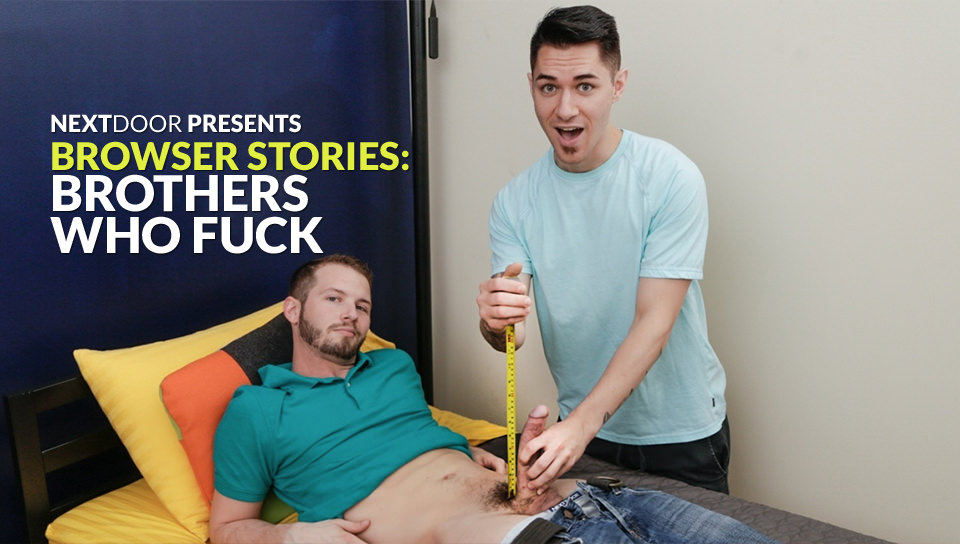 As Zak Bishop enters the room he shares with his step-brother, he finds Asher Devin in a mild state of anxious panic. It seems Asher is overly preoccupied with dick size, and whether or not he measures up. Zak tells him he’s probably fine, but if he’s that worried he should just measure it.

Asher seems incredulous, so Zak helps him out, grabbing him by the shaft and stretching Asher’s cock to full length. Zak grips Asher’s member by the base and feels him get harder. Asher’s measurements are impressive, but now Zak decides to manipulate the situation to his benefit, asking Asher if he’s sure he’s got the stamina.

Asher seems confused, so Zak leads the way, explaining to Asher that having a big cock and knowing how to use it are two separate things. Zak tells Asher he should practice, and since there’s no one else around, Zak volunteers to help his brother out, sucking him off until Asher is good and hard enough to give put his fucking skills to the test.

He immediately proves to be a natural, taking Zak by the waist and pulling him back closer, pounding him from behind as Zak grabs a hold of the bed. Zak mounts Asher and rides him reverse, bouncing his ass up and down on his brother’s cock, before they both spit their loads in a steamy, messy exercise of brotherly bonding…Join them!