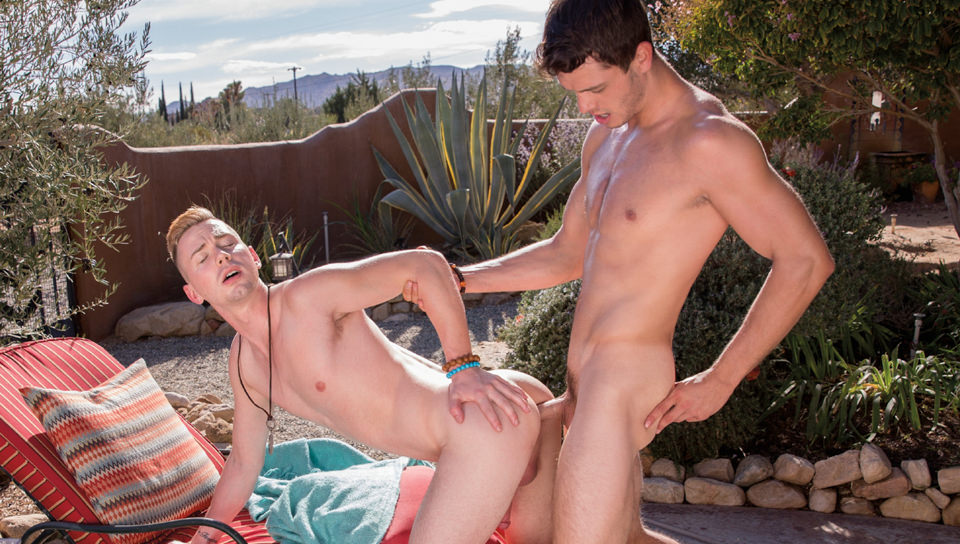 Hot jock Kyler Ash meets up with hunky Carter Michaels for some fun in the hot desert heat. Without words, the two studs lock lips and make out in the sun.

Carter wants to cut to the chase and gets on his knees to discover what’s behind Kyler’s bulging jeans. After working the hung young jock with his mouth, Carter sits back on his chair and lets Kyler explore his body.

Kyler can hardly contain himself when Carter’s massive manhood pops out from behind his zipper. He doesn’t waste a second getting it into his mouth while working Carter’s smooth hole with his fingers at the same time.

Kyler pumps away, keeping a steady pace between Carter’s spread legs. Kyler craves more and bends Carter over to fuck him from behind.

The toned stud has his way with Carter and builds to a grand finale that leaves Carter’s smooth ass sticky and covered with Kyler’s load…Join them!

Carter Michaels is getting this party started and Gavin Taylor is invited. The bar-keep isn’t too keen on hosting a fuck fest but these two can’t contain themselves.

The party isn’t over until Carter & Gavin’s cum-lust is satiated. This bar’s patron’s will have some juicy stories to tell…Join them!