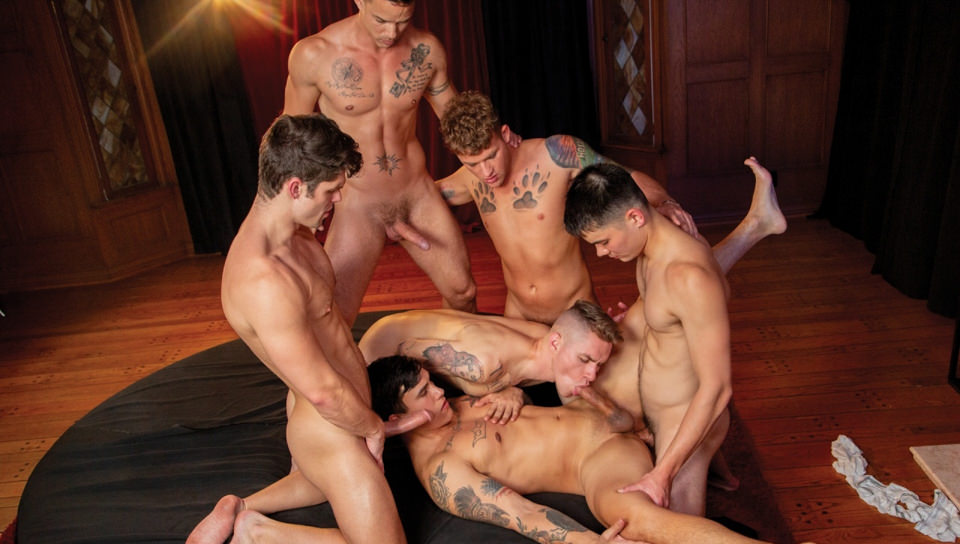 On the night of the Final hazing ceremony at the fraternity, ‘The Pledge’ has been made. Whoever gets through the ceremony will be initiated into the brotherhood. The ceremony starts after Devin Franco reveals the ultimate betrayal from one of the brothers that puts Trevor Miller into a submissive position.

The entire brotherhood lines up to teach Trevor a well-deserved lesson and every single dick in the room ends up in one of Trevor’s holes. After Devin has his way, Colton Reece gets to have his turn on Trevor’s hole as Zak Bishop jumps in to suck more cock. Brandon Wilde is up next and jumps in to get his dick wet before surrendering to Nic Sahara’s desires to be the next in line.

Fresh out the shower and into his man’s arms, Trevor Miller and boy toy Johnny Hill sure do make a clean pair, but rest assured they’re about to get down and dirty with each other. Taking turns fucking and sucking each other off, there’s nothing but eye candy to see here.

Watch as Johnny begs Trevor to fuck him, spreading his legs wide with inquisitive eyes, before turning the tables and mounting Trevor’s bubble butt as he fucks his hole raw.

Tired and fed up with Trevor Miller’s lies, Markie More nonetheless decides to give his boyfriend one more chance to be the kind of partner he’s looking for. Trevor promises he’ll be better and Markie tells him words mean nothing, and that he’ll have to prove it.

Taking it as a challenge, Trevor leads Markie to the bedroom and throws him down on the bed, kissing him hard as he works Markie out of his clothes and begins to suck him off. Markie’s cock swells inside Trevor’s mouth, and he looks up at Markie and smiles and he goes back down on it.

Markie pushes his head down onto his dick and makes Trevor gag before pulling him up and stripping him out of his pants. He returns the favor, downing Trevor’s cock before bending him over and slapping his raw cock on Trevor’s ass. He slides it in as Trevor moans, working it in and out as Trevor clutches the comforter.

Markie fucks him from behind, opening Trevor up, before letting him get on top. Trevor straddles Markie and gives him a ride, his dick slapping against Markie’s stomach as he takes the pounding.

Trevor jerks his load all over himself as Markie bends to kiss him, telling him this was a good start…Join them!