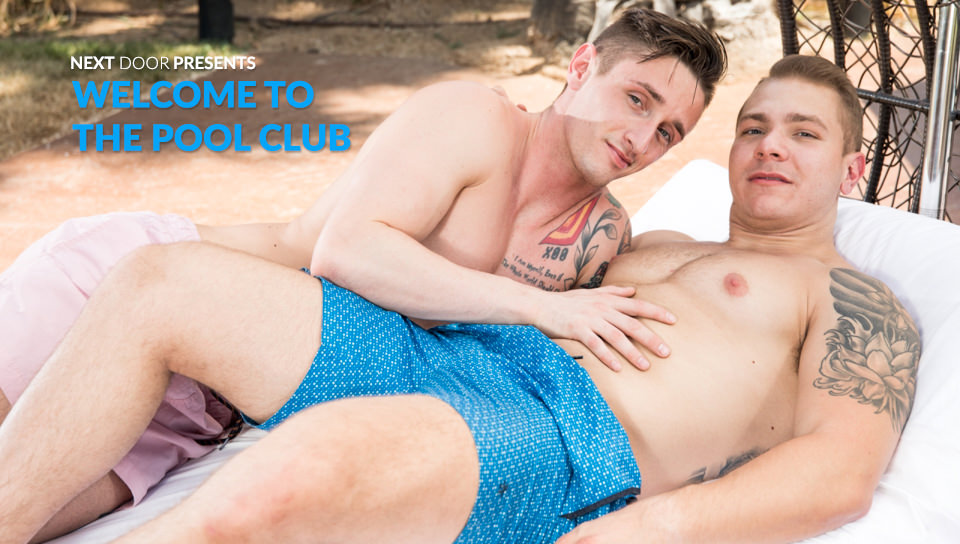 The sun is out and the water feels great, but it’s gonna take a lot more than a quick dip to cool off all the action poolside, as Vince Michaels and Lance Ford take a time out under the cabana.

After stripping each other out of their swim suits, Lance and Vince take turns going down on each other before Vince bends Lance over and has his way with him, fucking him from behind right out in the open.

Lance takes Vince’s raw cock as it thrusts in and out of him, then suggests they finish up in his private suite. He leads Vince back to his room and Vince throws him on the bed, fucking him raw every which way until Lance spews his batch all over his stomach.

Making his last delivery for the day, Vince Michaels realizes he recognizes customer Nathan Styles, and not just because Nathan used to date one of Vince’s friends. No, Vince recognizes Nathan from his on screen work in the adult industry, and when Nathan realizes this, he becomes a little nervous.

Vince assures him he’s cool with it, and in fact, begins to pick Nathan’s brain on how to get started. Offering a bribe of beer to go with the delivery, he finds himself hanging with Nathan and asking him questions about the biz. Nathan answers Vince’s questions patiently, slowly piecing it together that Vince has never been with a guy, but really secretly wants to.

When he asks Vince directly, Vince makes a move for Nathan’s shorts, quickly pulling them down and immediately sucking Nathan’s cock. Nathan smiles but doesn’t stop him, so Vince continues. To Nathan’s surprise, he turns out to be really good at sucking cock for someone who’s never tried it before, and Nathan finds himself genuinely turned on.

He returns the favor to Vince, sucking him off as he plays with his balls, and once Vince is nice and hard, he bends over and tells Vince to fuck him. An hour ago, Vince was delivering food to a stranger, and now he finds himself cock deep in his fantasy of fantasies, as he pounds Nathan all over the sofa.

He squeezes Nathan’s sweet ass as he watches his cock stretching Nathan’s hole from behind, finally turning Nathan over and fucking him missionary until Vince is ready to shoot. He empties himself all over Nathan’s hole as Nathan shoots his load all over his stomach.

As they kiss, Nathan tells Vince he definitely has what it takes to make a career switch…Join them!