‘Cake Shop’ owner, Jake Nicola greets his old flame Donnie Argento, who wants to surprise his husband, Sharok, with a special cake for their first anniversary.

Jake and Sharok strip down and take turns eating his ass, especially after Donnie squats down on the special dessert and gets his own cakes covered in frosting.

Licking him clean, the boys get him primed and ready for a raw, deep-dick fuck as Jake’s thick prick pries Donnie’s ass open, and Sharok’s huge tool gets in for sweet, sloppy seconds.

Donnie gives as good as he gets and he fucks his hubby hard, then climbs on the counter to sit on Jake while Sharok bangs the baker.

Lucas Leon is sitting and flexing, admiring his own physique and ‘Manscent’ when Sharok stumbles upon him and starts rubbing his bulge thru his jeans. Lucas is curious and invites Sharok over for a closer look.

They lock lips before Sharok takes his infatuation with Lucas to his knees when he turns him around to get a taste of Lucas’ hairy hole. After getting tongue and finger-fucked by Sharok, Lucas gets down to release Sharok’s hairy cock from his denim and into his mouth.

After a sopping wet hummer, Lucas hops on top of Sharok to ride his raw cock deep. Lucas holds tightly onto Sharok’s harness as he bounces up and down on his girthy cock.

Going ass to mouth, Lucas climbs off and back down to his knees to suck the thick cock that was just up his ass, taking big sniffs of Sharok’s musky cock in between slurps.

When Sharok wants more of Lucas’ tight hole, he moves him up against a wall and pummel’s his bare cock into the moaning stud hard and fast. Sharok holds onto Lucas’ jock while Lucas braces himself on the wall from Sharok’s powerful thrusts.

Sharok gets Lucas down on his back one last time to stretch out his hairy hole. Lucas moans load while Sharok keeps fucking him hard and spitting on the muscle-bottom.

Seeing Lucas take his raw cock so well sends Sharok over the edge, and he dumps his load all over Lucas.

Pushed to his limits, a few huffs of Sharok’s sweaty pits is all it takes for Lucas to dump his thick load out onto the floor…Join them!

Bat boy, Sharok, is cleaning up the locker room when players Ricky Larkin and Wade Wolfgar enter from the showers after losing a game.

They pick on Sharok for being their bat boy but Sharok knows that they really need to blow off some steam after their loss.

Sharok gets on his knees and opens his mouth wide for Ricky and Wade to take turns fucking his eager face.

Sharok gets the guys rock hard and bends over to let them get a taste of his hairy hole.

Wade is the first to suck on Sharok’s hairy crack and gets him nice and opened up for his buddy, Ricky, to fill up with his big raw bat.

Ricky slides inside and pounds away as Wade fills Sharok’s face with his thick cock.

It’s almost too big to fit in Sharok’s hole but Sharok is determined to take it balls deep and rolls onto his back with his legs in the air.

Wade stretches the hole in front of him as Ricky fucks Sharok’s face.

The guys take turns railing both of Sharok’s holes from each end until Wade wants his turn as the catcher.

As a last-minute pinch-hitter, Wade goes from pitcher to catcher and lies back to let Ricky pound his ass.

Next up, Sharok steps off deck and up to the plate to fuck Wade until both spent studs blast all over Wade’s furry body…Join them! 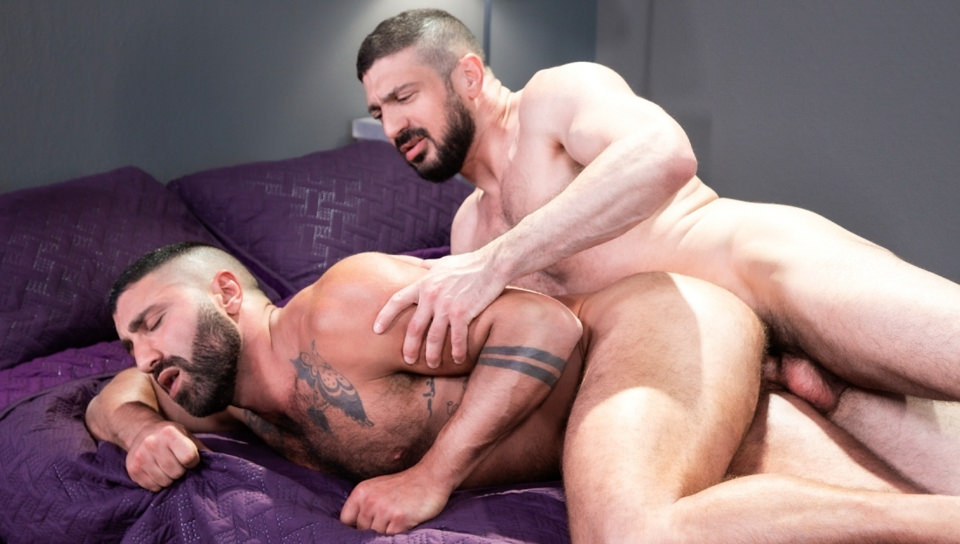 Sharok and Marco Napoli are already naked and ready for action when Sharok gets on his knees to service Marco’s nice fat cock. He works it in and out of his hungry mouth, getting himself hard as a rock as his mouth does all the work.

When Marco sees Sharok’s massive hard-on, he drops to his knees to return the favor. Sharok loves the feel of Marco’s lips wrapped around his shaft, and face fucks Marco until Sharok is ready to take it up the ass. Marco bends the stud over the bed and eats his hairy ass until Marco is sure that Sharok is open and ready for all the raw cock he’s about to take.

With his ass fully loaded, Sharok rolls over and covers his stomach with creamy white jizz…Join them!

Adam Ramzi and Sharok sneak onto a construction site at night when no one is around to get have some uninhibited fun. Adam is hungry for dick and doesn’t waste a second getting on his knees in front of a naked, Sharok.

Adam takes the hairy meat down his throat and grabs Sharok’s phone to record the fun. After getting his fill of dick and opening Sharok’s ass with his tongue, Adam is ready to plant his rod deep inside Sharok.

Adam stands up and slides his raw cock into Sharok’s crack and picks up the pace to fuck the stud fast and deep. Sharok takes the phone and keeps recording the action as Adam continues the ass ramming.

Adam pounds his load inside and continues until Sharok blasts his own load all over his own hairy crotch…Join them!

Just out of the shower, Sharok is lounging around in his bathrobe, he’s trying to concentrate on his work. His BF, Zak Bishop heads outside for a workout in his gym kit.

Sharok has trouble keeping his eyes off Zak’s hot body and his hot booty so tight looking in his running shorts. Sharok finds all this, too distracting and he quickly gets a big boner.

When Zak comes back inside, it’s Sharok’s turn to work up a sweat as he sucks Zak’s cock and eats his ass, then plays with Zak’s hole while the bottom sucks his cock.

Sharok gets his muscles pumping as he pounds in and out of Zak’s pert ass in doggy style, then Zak rides his man’s big cock.

There has been some heavy snowfall and the temperatures maybe a little challenging for black bearded hunk LA dude Sharok, but he is back indoors and happy to be making out with ripped young muscle stud Levi Karter.

Sharok and Levi embrace making out, his lips moving up and down Levi’s ripped body returning to kiss his lips.

The horned up dude gets totally worked up as they engage in nipple play with Levi sucking down hard on his nipples.

They tease each other before Levi’s unleashes Sharok’s big cock and swallows it until it hits the back of his throat making him gag.

They keep going, glued together in a two-fold 69 until Sharok bends Levi over to dominate his ass, pounding him from behind and on top.

Sharok takes a little break to tongue Levi’s hole but soon resumes drilling him with increasingly aggressive but affectionate passion.

Sharok takes Levi from the side before lying him back to suck him and rim him.

Soon, Sharok rams into Levi only stopping to give him oral pleasure.

Sharok takes him from behind again but soon tosses him on the bed for Levi to ride him.

This drives Sharok into an intense orgasm inside Levi, who uses his hole to literally squeeze & milk Sharok’s cock.

In turn, Sharok soon pulls out to shoot a big thick load again in Levi’s crack.

As Levi sits on top of a totally spent Sharok and kisses him, it’s clear who was really in control.

Ripped young Latino stud Angel Rivera is excited to be partnered with sexy muscle man Sharok and we can expect a scorching hot gay sex session.

Angel’s eyes light up when he finds out how Sharok likes to treat a bottom boy especially when Sharok mentions a penchant for jockstrap wearing young dudes.

Sharok soon buries his face Angel’s crack and eats out his hole, and slaps his ass just as Angel wanted all along.

Sharok passionately kisses Angel and when he moves in front of him, Angel is all too ready to suck his cock.

The more Sharok manhandles Angel, the harder they BOTH get harder.

Finally, after Sharok has primed virtually every inch of Angel he gets behind him and fucks him hard.

It’s when he picks him up and takes him to bed that Sharok lets loose and really drills Angel’s ass.

Angel relishes every bit of the hard pounding while on his stomach and when he’s pinned on his back.

And when Sharok needs a slight break from the fucking, Angel is right there to suck him.

Soon Sharok gets his second wind moving into a 69 with Angel and slobbering over his hole again.

Before he fucks him though, Sharok gets Angel to put on a teasing show for him.

When Sharok is ready he allows Angel to sit on his cock.

Sharok bounces Angel on his cock and then just lets him work his hole on it.

Finally, while buried deep inside him, Sharok picks up Angel and fucks him on his back, and in no time, Angel shoots a thick load.

Sharok milks him dry and sucks the rest from his cock head, then sits back and strokes out a big thick load of his own.

As you might expect, they’re just plain drained. For now, that is.

Sometimes when you are feeling very low, something unexpected happens to lift you up.

That’s our story here as heartbroken Avery Jones is given an afternoon of passion from Sharok, a hot and sexy stranger.

Avery is sad and just wants to be alone listening to his music, but passerby Sharok wants to help…and won’t take no for an answer.

Sharok buys Avery lunch and after a fun food and conversation, Avery has lightened up and a grateful kiss turns into a full-on make-out session.

It isn’t long before hands wander, and Avery is on his knees sucking Sharok and making him swoon with his deep-throating.

With his sexual passion fully ignited, Sharok turns Avery around and eats his ass, burying his face in his crack and thumb-probing his hole.

When Sharok takes a break, Avery goes right back to swallowing his cock, and as he does Sharok reaches around to play with Avery’s ass.

Avery is insatiable however and keeps sucking Sharok as he lies back enjoying the pleasure.

Sharok resumes his control when Avery starts riding his cock by holding his arms behind his back and thrusting up into him.

Avery then turns around and sits on his face and Sharok’s tongue action drives Avery to sit on his cock again and take more deep thrusts.

It’s not long before Sharok effortlessly lifts up Avery, still impaled on his cock, and puts him on all fours to eat his ass again.

This time Sharok makes a quicker transition and starts pounding Avery from behind.

Driving his cock into Avery every which way Sharok then flips him over to drill him.

As he does, Sharok sucks Avery’s feet and kisses him passionately while fucking him steadily until Avery shoots his load.

Sharok is close too and lies back to stroke his cock.

Avery helps Sharok over the edge by sucking his nipples while Sharok probes Avery’s hole with almost all fingers.

He gives Avery a facial which is almost all gobbled up.

They kiss again and Sharok holds him tight, Avery’s sadness now melted away.