It’s been months since Daniel Flores has seen his sweet man, Trent King. Trent’s in the service and hasn’t been deployed this long since the two moved in together. Daniel isn’t expecting Trent until tomorrow, but some plans changed and he’s come in a day early.

Daniel was taking a nap when Trent called to surprise him, so now he’ll be surprising him in person. Daniel wakes to the feeling of another body getting into bed with him. At first, it seems to Daniel to be a dream. But when he feels Trent’s warm touch and soft kiss, he knows it’s real.

They kiss and Trent’s hand wanders down to Daniel’s growing bulge. Trent smooches and licks his way down Daniel’s body, finally arriving at that pulsating, now-hard meat, pulls down Daniel’s bright yellow underwear and takes that fat cock into his mouth.

He tenderly sucks it for a while, then Daniel turns over so his lover can taste his ass. Then Daniel returns the favor, slurping down on Trent’s enormous erection. It’s a familiar dick to Daniel, and Trent knows well the feeling of Daniel’s caring lips around his throbbing shaft.

Soon after, Trent moves behind Daniel on the bed, both on their sides, and inserts his hard cock into Daniel’s hungry hole…Join them! 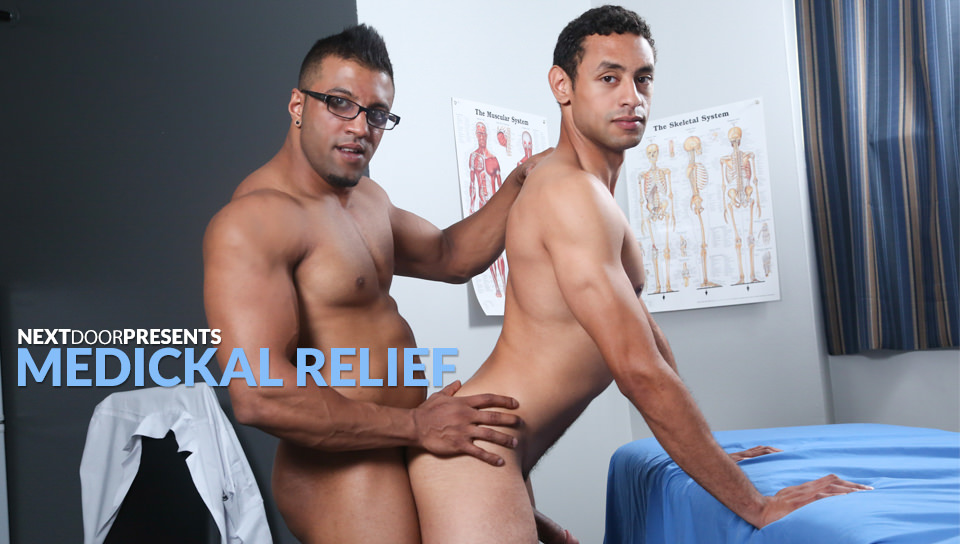 Daniel Flores had been having trouble getting to sleep, and also noticed he had been feeling less energetic. He decided a trip to the doc was in order. When Dr. Damian Flexxx greeted Daniel at the doctor’s office, Daniel was shocked at how big and handsome he was.

Damian had never seen such a hot doc. Dr. Flexxx was caring and thorough in his examination. After checking Daniel’s general health, Dr. Flexxx asked Daniel to remove his clothing, all of it. Daniel sure didn’t argue. He was really hoping to find an answer to his problems and was willing to fully cooperate.

When Daniel pulled off his underwear, Dr. Flexxx noticed Daniel’s cock was swollen and hard. The Doc knew exactly the problem. It was a clear-cut case of blue balls. Dr. Flexxx informed Daniel of the issue and got to work right away, clearing out the blockage.

First, he stroked Daniel’s stiff cock with his hand for a little while, feeling out the medical situation. Then Dr. Flexxx removed his own clothes and had Daniel suck his own swelling cock. Sometimes erection can be temporarily contagious.

It’s a good thing Dr. Flexxx specialized in boners during his pre-med studies. Daniel sucked as vigorously as he could. Bobbing his head up and down, back and forth as his mouth worked on the Doctor’s hard dick. After a good bit of this, Doctor Flexxx turned around and bent over the examination table so Daniel could lick his ass.

When the time was just right, Dr. Flexxx got behind Daniel and slid his hulking dick into his patient’s tight hole. Join Daniel for his trip to the Dr. Flexxx’s, and see this good doctor help Daniel expel lots of troublesome cum…Join them!

For teammates Daniel Flores and Ty Thomas, playing on the same team is just the beginning of their bond. Best buds for quite some time, they decide to celebrate after a big win by raiding Daniel’s parents’ liquor cabinet.

With the drinks taking effect, Ty drifts off to sleep, sporting a massive sleep hard on that peeks out from the side of his shorts. Daniel steals a glance and notices the head poking out, and temptation gets the best of him. Ty has no idea he’s into guys but Daniel decides to take a shot, rubbing the tip of Ty’s penis lightly, trying not to stir him as he slowly takes it in his hand.

Stirring awake, Ty is stunned to see Daniel fiddling around in his pants, and though his initial reaction is to recoil, he finally admits he hasn’t been getting any at home. Daniel sees his opening and tells Ty to close his eyes and blame it on the alcohol, which works for Ty, as Daniel begins to deep throat his cock.

Shocked at how good it feels and how good Daniel is, Ty pushes Daniels head further down onto his dick, telling Daniel that they have to keep this a secret. Daniel smiles as he sucks on Ty’s balls, asking Ty if he wants to try it. Ty is hesitant but feels curious, taking Daniel’s cock in his mouth, Ty does his best to please his friend, but what Ty really wants is Ty’s hard cock deep inside him.

Ty obliges, shoving his dick inside Daniel’s hole and pounding him from behind as Daniel etches a grin across his face. Ty is a quick study, and they fuck all over Daniel’s living room, finally concluding with Daniel on his back stroking himself to orgasm as Ty blasts his face with his virgin load.

Ty laughs when Daniel tells him his parents won’t be home all weekend…Join them!