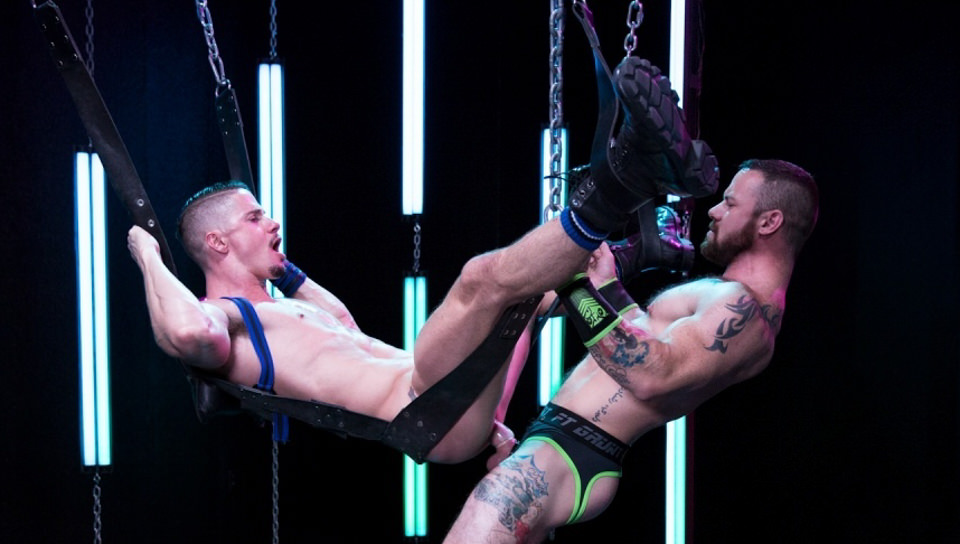 Skyy Knox and Sergeant Miles come together in a smoky, dim room where all that matters is the feel of their flesh pressed against each other.

The studs go slow, taking time to enjoy every inch of sweaty skin the other has to offer. After licking and exploring every bit of hard body that Sergeant has to offer, Skyy gets on his knees in front of the extra hung stud.

Skyy is so excited to suck dick that his own uncut cock is leaking pre-cum as he wraps his lips around Sergeant’s engorged pole.

It’s a tight fit, but Skyy manages to get the stud’s whole cock down his throat as ropes of spit run out of his mouth and drip down Sergeant’s massive sack.

Sergeant is ready to show the young stud what it feels like to have his ass stretched out. Sergeant mounts up and pumps the muscle hunk from behind.

There’s no reprieve for Skyy’s hot hole as Sergeant continues the rough reaming with complete and utter control over Skyy.

With Sergeant drilling away at a steady pace, Skyy soaks his own stomach with an eruption from his cock.

Sergeant is happy to add to the mix and pulls out to unload all over Skyy for a grand finale that leaves the sweaty stud dripping wet and full of cum…Join them!

Sergeant has been fooling around with the hot Blaze Austin for a few months now, and while Aaden is staying with Sergeant in his city apartment, he invites him into his bedroom to share Blaze.

Before long, both Aaden Stark and Sergeant Miles both are double-penetrating Blaze Austin in his tight backdoor…Join them!

At this point, he doesn’t care if he gets any time with Brian or not, he just wants to nut. He stops by the pool to let off some steam, and there he finds the Latino hunks Rico Marlon and Ken Summers. This gives Sergeant Miles the perfect opportunity to whip out his dick and have some fun with two of his sexy-as-hell cast mates.

Rico and Sergeant are both in the mood to fuck a guy in the ass, and Ken Summers is more than happy to take them both on at the same time. If you check out 15:00, you’ll see Ken being split in two when Rico and Sergeant double-penetrate him… just listen to the moans…Join them!

Emerson Palmer has a crush on his business associate, Sergeant Miles, but he has yet to break the professional boundary and make a move. There’s been flirtation, but that’s the extent of it. There’s no denying Sergeant looks awesome in a suit, so we can empathize with Emerson’s feelings.

But if Emerson Palmer knew how easy it would be to get Sergeant Miles on his dick, he would have tried a lot earlier. It begins when the two white-collar executives are working overtime in the office one weekend. Sergeant opens up Emerson’s suit and starts sucking his cock after some small talk.

This leads to Sergeant taking a seat on Emerson’s raw cock. When Sergeant gets his heat up and strips off his suit, he wraps his sports coat around Emerson’s throat and fucks him until he’s red in the face. See for yourself at 20:50…Join them!

These guys both look insane out of their clothes, and both of them are eager to fuck the other. Sergeant Miles sure loves taking a hard dick up his ass, but when James Castle bends over to show off his pretty little fuck-hole, Sergeant can’t help but climb on top and pound away.

Also, if you’re a fan of Sergeant’s oral fixation, check out the 06:00 mark,he once again proves how much he loves sucking dick. And James looks like he’s enjoying every second of it…Join them!

And when Volkov saw who his on-set secret admirer was, he wasn’t going to say no to Sergeant’s request.

But the look of Sergeant sparked in Volkov the desire to top, and Sergeant wasn’t about to deny him his request, either…Join them!

The two hunky otters begin by checking each other out, but it’s anyone’s guess who will drop to their knees first (Spoiler Alert: it’s Sergeant who get his mouth on Xavier’s bulge).

It’s not all about the oral sex (though sometimes Sergeant looks like he wants it to be) these guys are after each other’s ass, and they aren’t afraid of breaking each other. Because when they fuck they fuck hard.

If you want to see Xavier Jacobs bottom, this is your chance and who better to bang him in the ass raw than Sergeant Miles…Join them!

One of Ken Summers favorite gay sex activities is spit-roasting, he loves servicing two dicks at the same time. The more macho the guys are the better, so the opportunity to work on the raw cocks of alpha-male tops Sergeant Miles and Brock Magnus was something Ken could not pass up.

Dylan is muscular, covered in tattoos, and has a nine-inch cock he used to pound Ricky senseless. Sergeant Miles is next in line to bend Ricky Verez over and make him submit like the bottom bitch he is.

Ricky’s always eager to bounce on a hard dick, and Sergeant loves watching a bottom boy who knows his place… which is taking his dick…Join them!

Sergeant begins his private session with some foot worship before moving on to swallow Brian’s hard cock.

Sergeant Miles is Diego Gaston’s young stepfather, and he rules the household. While he’s washing up in the bathroom shirtless and only wearing a pair of jeans, he orders his stepson Diego Gaston to make him a sandwich.

Diego, however, has no intention of doing what Sergeant says, leading Sergeant to discipline his stepson with a spanking. This only turns on Diego, which leads to Sergeant sucking on his throbbing cock while he sits on the counter.

Sergeant gets off on blowing Diego, so he gets rough with him in a hardcore suck-and-fuck encounter between stepdad and stepson…Join them!

Sometimes a guy needs a firm hand to learn how to properly service a true man, and Sergeant Miles takes the time to teach this lesson to Jon Bae. At the onset he’s being led around by a belt tied around his neck and wears only briefs.

What follows is a mercilessly deep ass fucking Jon Bae can barely handle. But if you’re going to get involved with an alpha-male like Sergeant Miles, it’s something you must be prepared for…Join them!

Damon Heart has had his eye on the contestant Sergeant Miles since “Breeding Prince Charming” began, despite it being improper for the host involving himself with the contestants. When Sergeant finds himself in an unfavorable situation, Damon cuts his job as host short and offers the muscular stud some support.

And that supports turns into Sergeant brandishing his hard cock. Yes, Sergeant is an awesome top and most guys beg for the chance to take it up the butt from him, but sometimes he wants his ass played with too. Damon gives Sergeant that needed attention at 09:10.

Nick Capra stars in “Secrets Between Uncles And Nephews” as Paul, a father, and a husband who finds the difficulties in his life at an all-time high.

His 12-year marriage to his husband, Jeffrey (played by Adam Russo) has lost its spark and the romance isn’t what it once was.

Even worse, his relationship with his son, Bryson (played by Drew Dixon) is cold and strained, because Bryson has never forgiven Paul for coming out of the closet, divorcing his mother, and marrying another man.

The tension is palpable during a pool-party visit from Paul’s brother-in-law, Markus (Sergeant Miles), and Paul’s nephew, Dylan (Drake Rogers).

The gathering is to celebrate Dylan’s twenty-first birthday, during which Markus has a few too many, and being the doting host, Paul helps him to the guest room.

But Markus has some secrets of his own, and when he and Paul are alone together, Markus shows Paul another side of himself.

As soon as Adam gets through the hotel door we see him get undressed showing off his tight young body and milky white skin.

After a short while in Adam’s expert hands Sergeant can’t control himself any longer and he man-handles the young stud with his rugged military hands forcing him into position.

Oliver Hunt is young, handsome, and has one of the cutest faces. He also has a weakness for men older than him, and if they have a patriarchal vibe to them, he’s totally on board with taking on a new daddy.

While staying with Sergeant Miles in Mexico, Oliver Hunt finds himself in a submissive scenario with the older—and very macho—military top.

While Sergeant Miles is in the bedroom, he calls upon a fully dressed Oliver to come up and join him.

Before long, Sergeant Miles pulls down Oliver’s shorts and underwear and paddled his delicious little ass.

And this is just the beginning. Soon Sergeant Miles has a throbbing cock ready to be serviced, and it’s time for Oliver to prove what a good bitch boy he is for his daddy.

Sergeant has a well-known oral fixation—he loves sucking cock, so with their consent, the military man bound the hands of Gabriel, Ricky, and Isaac so he could exert some control over them and the situation in the bedroom.

And with the three studs sitting on the bed, lined up nude and with rock-hard erections, Sergeant Miles starts sucking them off.

Eventually, they all get too hot to remain bound, are freed, and Gabriel Phoenix joins Sergeant Miles as a top, and Ricky Hard and Isaac X submit their holes for some rough and raw punishment.

Pol Prince is a guy who knows what he likes, and he likes to be on top when he’s having sex with a man.

He’s a young and handsome guy with a lot of confidence, and it’s never been an issue attracting guys ready to assume the position head down and ass up.

But when Pol Prince met Sergeant Miles for the first time, there was something about his energy that evoked Pol’s submissive side.

Sergeant Miles is all man with a whole lot of machismo, and he likes a guy who knows his place.

While Sergeant Miles is relaxing in the sun, he asks Pol Prince to strip down for him.

Sergeant is fully clothed as Pol drops more and more of his, and eventually, his rock-hard erection gives away his enjoyment of submission to Sergeant Miles.

Valentin Amour has quickly developed a reputation among the Lucas Men as a bottom slut with a voracious need for cock. He doesn’t just want to get fucked, but he wants to be owned by his tops.

Sergeant Miles is more than happy to accommodate Valentin’s submissive desires, so much so that when he invites him over he demands he strip down to his jockstrap and uses him as a footrest.

Before long, Sergeant strips down and honors Valentin with the fucking he is so desperate to take.

Ricky Hard never fails to live up to his name.

That’s because he’s always ready and excited to take a big, fat cock right up his ass.

And without fail, Sergeant Miles has proven himself time and again to be a strong and dominant daddy top among the Lucas Men.

He’s always ground in popularity for this reason, and everyone wants a chance to land him in the sack.

This time it’s Ricky Hard’s turn to see what the stern and sexy hand of Sergeant Miles can do.

And when Sergeant grabs ahold of Ricky and starts fucking him deep and good, the bottom understands what all of the fuss is about.