“You still smell like him,” smiles Dirk Caber at his hubby. Dakota Rivers’ dick head peeks out of his shorts, Dirk having a taste (“Sexy fucker!”) before they free their beasts.

“Less talk, more suck,” says Dakota, Dirk wrapping his bearded lips around it. Dirk gets slurped, his dick snapping back to his stomach when released from Dakota’s mouth.

Dakota fucks Dirk’s furry hole, the bottom sitting all the way down to his tight sac. Dirk gets on his back—his boner expertly stroked as Dakota fucks him: “You are so mean when you’re doing that. I love it!”

Plenty of mysterious events await anyone on the Mojave Run. An isolated correctional facility is where sex addicted men such as Christopher Saint, Leo Alarcon, and Dakota Rivers have come to be treated.

Leo Alarcon, Jock Hudson, Ben Stone, and Adam Russo are trying to sleep in the heat of the night stroking their big dicks.

Everyone’s cocks are out as Jock Hudson’s hairy asshole is fucked by Dakota Rivers’ big cock.

Steven Daigle ever the voyeurist eyes the action as big muscle dudes Tom Wolfe and Junior Stellano suck each others’ big muscle cocks. He then joins together with them in one long fuck train.

Led by the artistic touch of award-winning director Brian Mills, a group of studs including David Anthony, Dario Beck, Marco Blaze, Will Parker, and Christopher Saint pulse and twitch their way through a throbbing series of scenes.

Surrender your mind, lose control, and give in to your primal instinct.

While lounging by the pool at night, a rock-hard Christopher Saint is soon seduced by tall, dark, and handsome David Anthony whose monster cock has a mind of its own.

The muscular bods and big boners of showering buds Dario Beck and Dakota Rivers are too much for voyeur Will Parker to take leading to enthusiastic slurping and an intense fuck chain.

Two titanic cocks come together when Marco Blaze moves in on handyman Tyler Saint, their oral excitement followed by a passionate flip-fuck that leaves them breathless.

David Anthony, JR Matthews, and Dakota Rivers lead the charge as massive muscles soak up the sun in this steamy effort.

You won’t find a better way to beat off the heat and yourself.

Gabriel Cross dozes off by the pool, but his dreams come to life in the form of Travis James.

The two put on a passionate show highlighted by a truly unforgettable fuck.

After playing in the pool, Dakota Rivers and Sean Stavos get the temperature rising again as they take turns stuffing both of JR Matthews’ holes.

Stroking in the shade, hairy hunk Jock Hudson is soon smiling at the site of tan top David Anthony whose monster cock keeps his admirer hard and happy.

Dakota is mad as hell because Gabriel has racked up his emergency credit cards buying frivolous toys for himself and his friends with Dakota’s money. Dakota demands more than a few answers, when he throws the bills to the side and slams his crotch in guilty Gabriel’s face.

Gabriel knows he has a lot of work to do to get on his daddy’s good side again and doesn’t waste a minute taking the muscle stud’s big hard cock down his throat. Dakota face fucks and gags the money-grubbing boy with his big daddy dick before he bends him over and eats his hot ass.

When Gabriel is nice and wet and opened up, Dakota slides his meat inside the ginger’s hairy hole and pumps his ass hard. Gabriel needs it deeper and turns around to ride the massively thick cock as Dakota overpowers his tight asshole balls deep and stretches his hole wide open.

It’s almost more than Gabriel can take and his cock explodes as his ass is getting pounded. Gabriel begs for Dakota’s load and licks his daddy’s big full sack as Dakota erupts all over Gabriel’s hungry face. 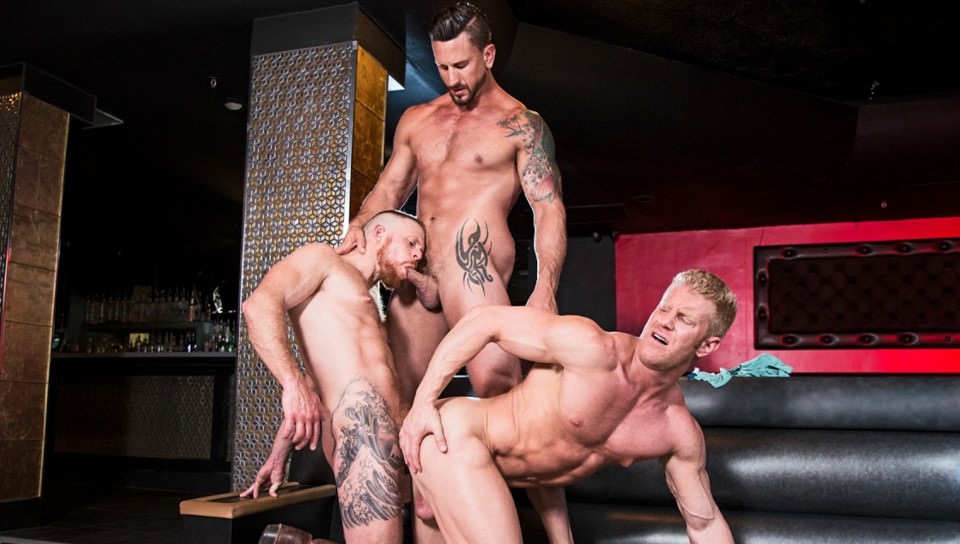 Jack Vidra is the bartender at the Ready Bar and he’s seen a lot of action come and go on his watch. He never gets to join in on the action and usually has to live vicariously through all the other patrons.

When he has to kick Johnny V out at closing time, Johnny wants to give something special back to Jack for all his hard work. His surprise is Dakota Rivers, a hunky stud with a body full of muscles who’s ready to please the bartender and his friend.

Johnny doesn’t like to be left out and takes turns with Jack sucking on the stud’s hard cock. Jack needs a bit more to satisfy his cravings and bends Johnny over to lick his ass. As Johnny keeps sucking Dakota, Jack slips his cock inside Johnny and pounds away.

With his mouth full and his face dripping, Jack gives himself permission to unleash the day and sprays his own hairy body with his bartender’s special blend…Join them! 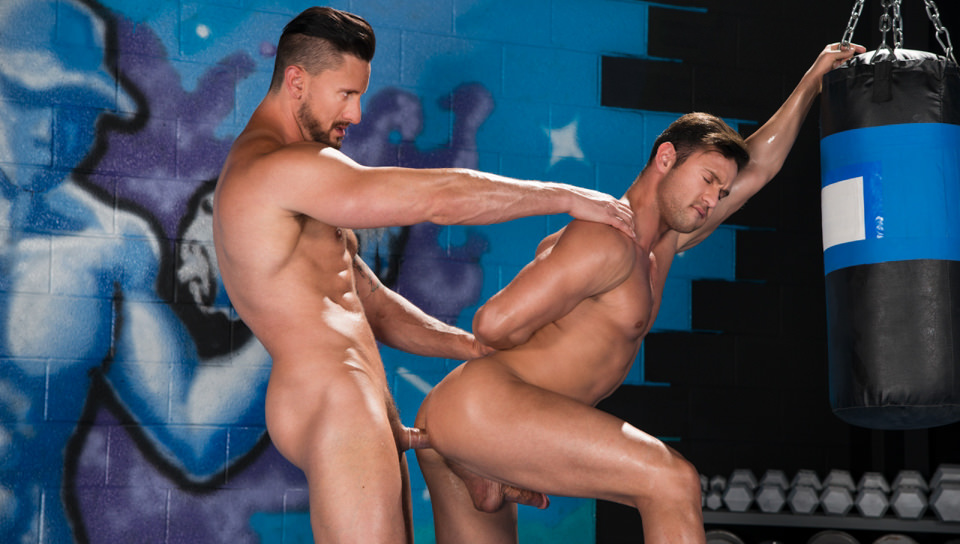 Big muscle dude Josh Conners is with his boxing trainer, Dakota Rivers in the gym. Josh is punching the pads hard as Dakota eggs him on to go in harder and harder.

They both build up a sweat and off come their shirts, revealing two big muscled hunks. It’s not long before they’re making out and Josh runs his inquisitive tongue down Dakota’s hot muscled body. Josh manhandles Dakota’s massive muscle cock.

Josh leans over the boxing punch bag as Dakota lubes up his ass for a real good hardcore as fucking. Josh looks Dakota in the eye as Dakota pumps his thick dick in and out of Josh’s open and throbbing hole. Josh’s low hanging balls swing wildly right and left as Dakota’s cock reams Josh’s tight ass hole. Josh enjoy’s every inch of his boxing trainer’s muscled cock.

Josh lies back with both legs in the air allowing Dakota to penetrate his bubble ass hard and deep. Josh’s cock remains rock hard throughout Dakota’s punishing ass fucking and can barely hold off his own orgasm. Greedy Josh doesn’t want Dakota’s ass hammering to stop enjoying the deep fucking for all it is worth. 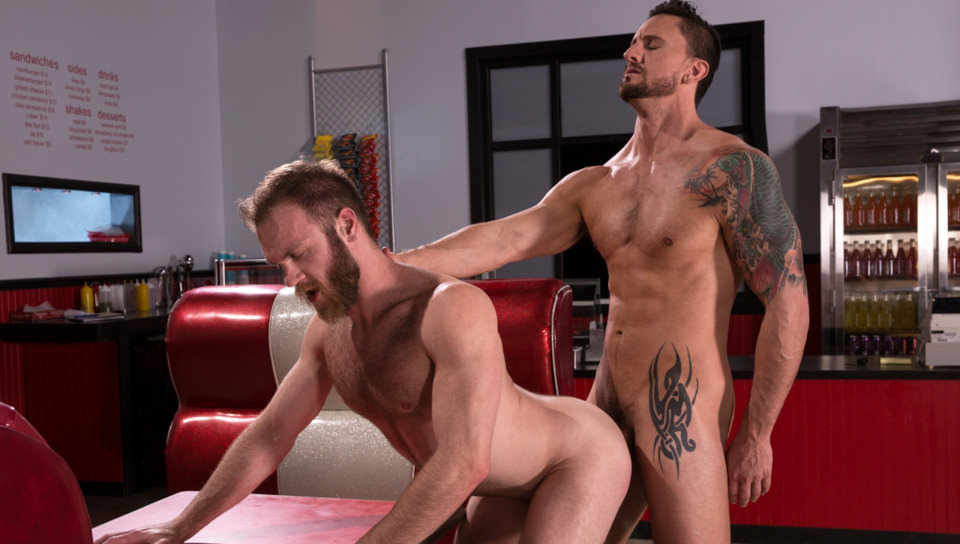 Hopeful new-hire Peter Marcus sits down with General Manager Dakota Rivers for an interview at the ‘Drive Thru’. As Dakota reviews Peter’s application, he notices he doesn’t have any experience in the food industry. Peter quickly replies, ‘I’m a fast learner and I’m eager to please.’

Dakota wants to see just how eager Peter is. Guiding Peter to his knees, Dakota whips his cock out. Eager for the job, Peter begins to service his potential employer’s fat cock. After checking Peter’s oral skills, Dakota decides to drill his tongue into his bare hole.

With Peter’s hole slick with spit, Dakota stuffs his meat into Peter’s man hole. After taking it from behind, Peter hops on the table, legs up, taking hard, powerful thrusts from Dakota. The intense drilling from Dakota’s cock is too much for Peter and he blasts a thick white load onto his furry torso.

Boss man Dakota strokes his hefty load onto Peter’s hole. When it’s all said and done, Peter still didn’t get the job…Join them!