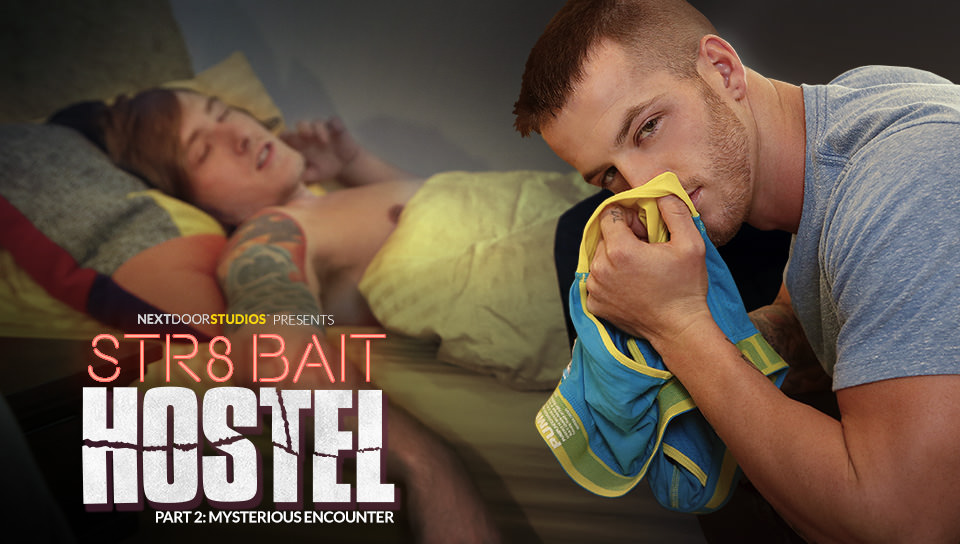 With very few rooms available at the hostel, travelers Quentin Gainz and Tom Faulk are forced to share a room, even though they are total strangers. Madam Hostel has already set them up to ensure that they get acquainted with a little trickery, and as the guys get settled into their room, the Madam’s plan begins to take shape.

Both guys find notes under their pillows. Tom’s note reaffirms his suspicions that Quentin is interested in his cock, and to his credit, Quentin’s note appears to be from Tom inviting him to do just that, so when Tom falls asleep, Quentin’s curiosity gets the best of him and he takes a peek under the covers, spying on Tom’s nice cock resting up against his leg.

Quentin takes it in his hand and slowly massages it. Tom stirs but doesn’t wake, and his cock swells up semi-hard. Quentin moves his head closer to have a taste just as Tom wakes up. Petrified, Quentin freezes, and Tom asks him what he’s doing.

Assessing the situation, Tom realizes what’s happening and taunts Quentin, asking him if he wants this cock. Quentin nods in the affirmative and Tom tells him to get started. Quentin wastes no time getting to it, downing Tom’s cock in one gulp, as Tom gags him.

Sitting up, Tom gets into it as Quentin strokes himself while sucking on Tom’s balls. Tom rocks Quentin back up against the wall propped up on a desk as he eats Quentin’s ass before sliding his cock inside his stranger roomie. Quentin takes the dick like a pro, as Tom gives him every inch of his giant cock.

Tom folds Quentin over onto his side as he continues to pound away, coming close to bursting as Quentin loses his nut all over himself, before Tom blasts him with his load. Smiling in the aftermath, the guys realize that they’ve been set up, though neither seems to really mind, after the fact…Join them!

It’s all set…Tom Faulk has the house to himself for the weekend and his girlfriend, Erica, is coming over for a little fun. Tom has cleaned the whole house and bought a few sex toys for them to share in having a naughty time.

But then Erica calls and bails out. Tom’s efforts have all been in vain. But it looks like his roommate, Brendan Phillips, had some plans change too. Now it seems they’ll be home together for the weekend. And when Brendan hears Tom’s girlfriend isn’t coming over, he gets a few naughty ideas of his own.

When Tom goes in to take a shower, Brendan leaves a Fleshjack in Tom’s room as a little surprise. Tom is confused, but also curious. Brendan watches him secretly, hiding behind a door. When the time is right, Brendan sneaks up as Tom fucks the Fleshjack.

He grabs the toy and begins helping Tom jack his big, hard cock. Tom is shocked and thrown completely off guard! It feels SO good to have someone else do the stroking with that thing. The sensation is too good to stop Brendan. Tom loses himself in the moment and the roomies find themselves kissing passionately.

The kissing leads them to move to the bed where Brendan cranks up the heat by sucking Tom’s throbbing erection. Brendan suggests that since Tom likes eating pussy, Tom should try eating his ass. Tom quickly realizes that he’s been missing out.

Tom Faulk is hosting a big Texas BBQ at his house for the rest of his motocross mates.

When Sean Duran joins them with his stripper t-girlfriend Ashlee (Axle Rose) the party really gets started and things being to go completely crazy.

After an impromptu strip-show, Tom gets an idea. He makes a wager with Sean that he can fuck his GF harder than he can.

The three of them head to the barn but Ashlee decides that she would rather watch Tom fucking hairy hunk Sean’s hot bubble ass.

Tom and Sean jokingly accept the challenge but it’s clear a little peck on the lips isn’t what Ashlee has in mind.

Reluctantly they start to make out and jerk each other off.

Horned up, Sean fucks Tom’s face then gets on his knees to suck his buddy’s dick.

With his cock wet and hard Tom decides to give Ashlee what she really wants and slams his rock hard meat deep in Sean’s muscular ass.

They fuck hard until both guys blow their loads, leaving them both drained and a bit confused. What the fuck just happened?